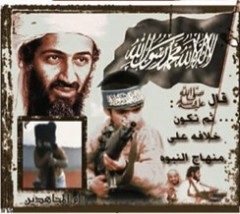 Children are symbols of innocence and purity, and are employed in jihadi imagery to evoke notions of pride, honor and injustice. Images of young children, usually boys, also suggest the emergence of a new generation of jihadi fighters who will continue to tread down the same path of resistance as their fathers before them. This idea is expressed in the image by the young boy clutching a weapon. His figure holds center stage between the picture of the fighters in the bottom right corner and the face of Usama bin Ladin on the left. The appearance of bin Ladin in the image ties the struggle portrayed here with the global jihadi movement and al-Qa’ida in particular.

The black banner on the right side of the image traces its roots to prophetic times. According to hadith (prophetic tradition or report), the black flag was the battle flag of the Prophet Muhammad and it was carried into battle by many of his companions.

In the contemporary Islamist movement, the black flag with the shahada (Islamic testimony of faith holding that there is no god but Allah and that Muhammad is his messenger) is used to evoke notions of jihad and of reestablishing the Islamic Caliphate. The black headband on the child’s head also bears the shahada. The caption is a partial text of a hadith that reads as follows: “qala rasul Allah, salla Allah ‘alayhi wa-sallam: …thumma takun khilafatun ‘ala minhaj al-nubuwwa” (“the Prophet, Allah’s blessing and peace be upon him, said: …and then there will be a caliphate according to the custom of the Prophet”).