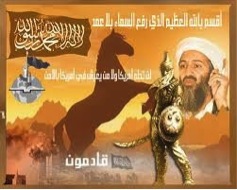 The captions from top to bottom quotes a famous statement from UBL: “aqsamtu bi-Allah al-‘azim lladhi rafa‘a al-sama’ bi-la ‘amad” (inaccurate and partial quote of Q 13:2) (“I swear by God almighty who raised the heavens without supports”); and “lan tahlam amrika wa-la man ya‘ish fi amrika bil-amn” (“America and those who live in America will never sleep [lit. dream] in safety”).

The armor-clad swordsman in the image also appears in other images produced by or for Jama’at al-Tawhid wal-Jihad (JTJ)/al-Qa’ida in Iraq, with minor variations (see, e.g., Image #200). The black banner bearing the text of the shahada (Islamic testimony of faith holding that there is no god but Allah and that Muhammad is his messenger) appears three times (including in the recognizable logo of JTJ/Islamic State of Iraq).  According to prophetic tradition (hadith), the black flag was the battle flag of the Prophet Muhammad and it was carried into battle by many of his companions.  The image of the black flag has been used as a symbol of religious revolt and engagement in battle (i.e., jihad). In the contemporary Islamist movement, the black flag with the shahada is used to evoke notions of jihad and of reestablishing the Islamic Caliphate.

In the bottom left corner is a representation of the World Trade Center’s burning twin towers, a visual reminder of the most lethal attack masterminded by Usama bin Ladin. On the right, Bin Ladin is seen raising his pointer finger in a gesture performed during the utterance of the shahada. Jihadi propaganda often marks important jihadi operations/violent events in order to establish these events as key milestones that shape the current jihadi movement. Usually, these events are reinterpreted as illustrations of the effectiveness of the violent jihadi struggle and its success in targeting its enemies. In particular, jihadi propaganda often displays examples of jihadi victory against much stronger and more powerful (Western) forces as evidence of the imminent victory of jihadist Islam over Western imperialism and secularism.

Images of mountains (lower parts of the image) are also a common motif in jihadi visual propaganda and may allude to regions with completed or ongoing operations, such as Afghanistan, Chechnya and Kashmir. More generally, however, mountains are used to evoke divine omnipotence, eternity and grandeur, as is the case in this image.