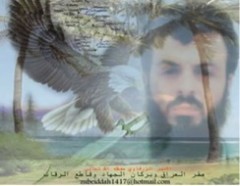 The caption in this image reads: “al-amir al-zarqawi, hafizahu Allah ta‘ala, saqr al-‘iraq wa-burkan al-jihad wa-qati‘ al-riqab” (“commander al-Zarqawi, may God the sublime keep him, is the hawk of Iraq, volcano of jihad and severer of necks”). Thus, in this image, it seems that the eagle is used in conjunction with other key symbols—namely, the sword and the map of Iraq—to praise and promote the actions of Abu Mus’ab al-Zarqawi, even though the man pictured does not appear to be Zarqawi. The world of birds is highly important in the symbolic language of Islam. Pre-Islamic Arabs imagined soul birds fluttering around the grave of the deceased, and it is believed that the souls of martyrs live in the crops of green birds. Today, the bird continues to symbolize the flight of the soul beyond the confines of this world. While not as rooted in Arabian and Islamic culture as the hawk or falcon, the eagle is thought to be the emblem of Salah al-Din al-Ayyubi (d. 1193 A.D.), who successfully led the Muslim world in battle against waves of Christian crusaders from the West in the 12th century. It is Salah al-Din’s eagle that was adopted by a number of Arab countries in the 20th century as a symbol of pan-Arabism and resistance to the West. The reference to the “hawk of Iraq,” together with the image of the bald eagle, may also be intended to signal an appropriation of American power.

As mentioned above, the map shown in the image is of Iraq. Depicting a country map without bordering countries or bodies of water emphasizes the national context and scope of that specific regional jihad. In this image, the map of Iraq is shown above the eagle, as well as a faint image of the shahada (Islamic testimony of faith holding that there is no god but Allah and that Muhammad is his messenger). This designates Iraq as an important theater for jihad, and implies a national obligation to join the struggle. Note that the location names on the map utilize English, rather than Arabic script. The use of English prevents this image from being associated with a specific ethnic group, such as Arabs or Kurds, thereby avoiding the alienation of one group or another. English text can also serve as a means of communication with Western forces and Muslims living in the West. Finally, the image contains the majestic branches of a palm tree. Various types of trees, but palm trees in particular, embody divine mysteries, such as origin, growth and death, and are inextricably linked to Mediterranean, Middle Eastern and Islamic cultures. In jihadi imagery, palm trees are often employed to evoke a sense of Arab or Islamic pride and concern.