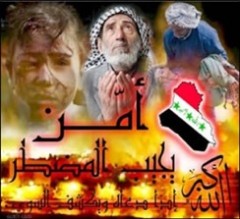 The caption in the image is a quote from the Qur’an (27: 62): “Ammin, yujibu al-mudtarr idha da‘ahu wa-yakshifu al-su’” (“ rest assured that he answers the needy when he calls him and [he] reveals evil”). The verse is uttered/cited in particular when wishing someone a speedy recovery. The image also contains a map of Iraq, depicted without bordering countries or bodies of water, which emphasizes the national context and scope of that specific regional jihad. The most dominant colors in the image are red and yellow. The first is the color of fire, blood, passion, impulse and danger. The familiar takbir appears in the lower right corner of the image: Allah Akbar [God is greatest].

Overall, the combination of elements in this image is designed to evince sympathy from the viewer. Of particular importance to that end is the image of a child, injured or deceased, as well as an image of an infirm spiritual leader. The image of the wounded children, the supplication of the old and infirm is clearly designed to stir powerful emotions on the part of the viewer.