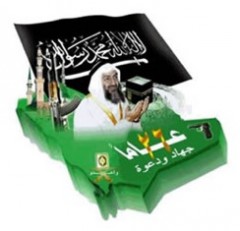 While Muslims across sectarian lines share a reverence for many holy sites, some sites hold special significance for certain groups. The Ka‘ba in Mecca is the symbolic and literal center of the Islamic faith for all Muslims, and it is a common motif in jihadi imagery. It is the single most important, and holiest, site in Islam and evokes the strongest sense of Islamic identity and tradition across all Muslim sects and groups. Although it is inherently pan-Islamic, the Ka‘ba can also be employed to draw attention to issues concerning Saudi Arabia. Use of the Ka‘ba  motif may also internationalize, or pan-Islamize, specific Saudi-centered jihadi concerns, such as the “occupation” of the Saudi holy sites by American forces during the first Gulf War. The idea is reinforced by the depiction of the Saudi map without geopolitical context or neighboring countries, a motif that emphasizes the national context and scope of that specific regional jihad.

The black flag traces its roots to prophetic times. According to prophetic tradition (hadith), the black flag was the battle flag of the Prophet Muhammad and it was carried into battle by many of his companions. The image of the black flag has been used as a symbol of religious revolt and engagement in battle (i.e., jihad). In the contemporary Islamist movement, the black flag is used to evoke notions of jihad and of reestablishing the Islamic Caliphate. Note that the black flag here is actually the Saudi flag in black (instead of green), emphasizing the notion of revolt against the Saudi regime.

The fact that most of the Saudi Arabia map is colored in green—which is considered the traditional color of the Prophet Muhammad’s tribe and has been adopted as a sacred color based on Qur’anic verses (76:21; 18:65-82) and a reliable hadith that associates green with “universally good things”—further emphasizes the image’s Islamic/religious aura.

The Ka‘ba is combined with other symbols—namely, Usama bin Ladin, minarets, an AK47, a pistol, the Qur’an and an acontextual political outline of Saudi Arabia—to evoke a sense of piety and duty in the twin causes of jihad and proselytization. This message is verbalized in the slogan: “jihad wal-da‘wa 26 ‘aman” (“jihad and da‘wa for 26 years”). Finally, the image associates Bin Ladin and al-Qa’ida with the most holy site in Islam, thereby signaling his religious piety.