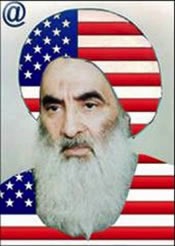 Jihadi imagery makes frequent use of Muslim political leaders, who are often criticized as oppressors of Islam and enemies of the jihadi movement. Indeed, jihadi ideologues hold that most current leaders of Muslim states are illegitimate based on a belief that no Muslim ruler may be considered legitimate unless the territory in question is governed solely by Islamic law. As a result, current leaders are often portrayed in jihadi propaganda as heretical Muslims who are willing puppets of Western countries and hence obstacles to the materialization of polities ruled according to Shar’ia.

Here, Ayatollah al-Sistani, the foremost Shi’a cleric in Iraq, is portrayed bearing the stars and stripes of the U.S. flag. The image is clearly designed to suggest al-Sistani’s “submissiveness” to Western power. The American flag, or parts thereof (such as the stars and stripes), are widely used in jihadi propaganda to evoke negative sentiments towards U.S. foreign policy and military campaigns.

Image of Cross with American Flag