Image of Cross with American Flag 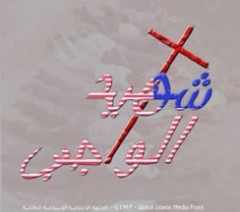 The American flag, or parts thereof (such as the stars and stripes), are widely used in jihadi propaganda to evoke negative sentiments towards U.S. foreign policy and military campaigns. The stars and stripes are also used to color other symbols in an image, thereby linking the symbols to U.S. foreign policy and military intervention in the Muslim world. Here, by adding the cross, the propagandists are attempting to link the U.S. and its occupation of Iraq with Christianity and the medieval Crusades. This conjures up the historical memory of the Crusades, and frames the U.S. occupation of Iraq as a form of neo-Crusade, i.e., a renewed war instigated by the Christian West against the Muslim East. The phrase that dominates this image is “shahid al-wajib” (“a martyr of an obligatory [religious] duty”). The Arabic word “wajib” refers to a category of the acts in Islamic jurisprudence that are obligatory on the believer. The obligation alluded to here is the obligation to engage the enemy—the U.S.—until death.