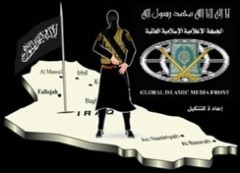 Here, a map of Iraq is depicted without bordering countries or bodies of water, which emphasizes the national context and scope of that specific regional jihad. In the center of the map is a flag displaying the shahada (Islamic testimony of faith holding that there is no god but Allah and that Muhammad is his messenger). Together, the isolated map and the flag designate Iraq as an important theater for jihad, and imply a national obligation to join the struggle in order to establish a true Islamic state. At the same time, the image contains the logo of the Global Islamic Media Front, which includes a picture of a globe. By juxtaposing the country map with the globe, the image is attempting to show that Iraq is an integral part of a broader, global jihadi movement. Notably, location names on the map are written in English, rather than in Arabic script. The use of English prevents this image from being associated with a specific ethnic group (e.g., Arabs, Kurds, etc.), thereby avoiding the alienation of one group or another. English text can also serve as a way to communicate with Western forces and Muslims living in the West.

The image utilizes bright white writing against a black background, which is common in jihadi propaganda. The black flag (pinned in the middle of the map) traces its roots to prophetic times as, according to prophetic tradition (hadith), the black flag was the battle flag of the Prophet Muhammad and it was carried into battle by many of his companions. The image of the black flag has been used as a symbol of religious revolt and engagement in battle (i.e., jihad). In the contemporary Islamist movement, the black flag is used to evoke notions of jihad and of reestablishing the Islamic Caliphate. This idea is reinforced by the rather inconspicuous, almost marginalized, two word slogan on the bottom right of the image: “i‘ada lil-tankil” (“reconquering” [literally, driving back/deterring again]). The word “tankil” in Arabic also carries the meaning torture and maltreatment.