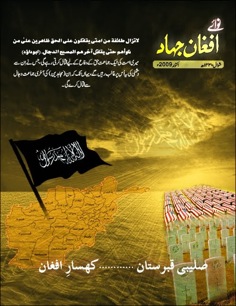 The image is the cover of the October 2009 issue of the magazine Nawa-i Afghan Jihad. It includes a number of elements, of which the golden rays of light are the most prominent. Light rays are usually used in jihadi propaganda to illuminate other symbols or text in order to give the images an aura of divinity and/or afterlife. In this specific image, shining through the clouds, the yellow light evokes divine power and glory.

The image also features white clouds, a map of Afghanistan, a black banner and American flags. The clouds evoke Allah’s total inscrutability prior to creation. The cloud is also the bearer of rain and therefore bounty (khayr, which is a synonym for rain), and is a sign of good things to come. The map, which is shown without bordering countries or bodies of water, evokes the national context and scope of that specific jihad, thereby designating Afghanistan as an important theater for jihad and implying a national obligation to join the struggle. The black banner appearing on the Afghan map bears the shahada (Islamic testimony of faith holding that there is no god but Allah and that Muhammad is his messenger) and constitutes the joint symbol of vengeance and revolt that traces its roots to prophetic times. According to prophetic tradition (hadith), the black flag was the battle flag of the Prophet Muhammad and it was carried into battle by many of his companions. The image of the black flag has been used as a symbol of religious revolt and engagement in battle (i.e., jihad). In the contemporary Islamist movement, the black flag with the shahada is used to evoke notions of jihad and of reestablishing the Islamic Caliphate.

Lastly, the American flag, or parts thereof (such as the stars and stripes), are widely used in jihadi propaganda to evoke negative sentiments towards U.S. foreign policy and military campaigns. The stars and stripes are also used to color other symbols in an image, thereby linking the symbols to U.S. foreign policy and military intervention in the Muslim world. The idea is realized in the image of the coffins draped with U.S. flags and spelled out in the caption at the bottom: “salibi qabr-stan kahesar-i Afghan” (“crusader ’grave-yard’”).

At the top left corner, there is a quote from a hadith (prophetic tradition), which reads as follows: “la tazalu ta’ifa min ummati yuqatiluna ‘ala al-haqq zahirina ‘ala man nawa’ahum hatta yuqatilu aakhiruhum al-masih al-dajjal” (“There is still a group from my umma [Islamic community] who continue to fight for the truth, gaining the upper hand against those who oppose them, until the last one among them fights the anti-Christ”). The image indicates that the quote is taken from Abu Da’ud, although multiple versions of a similar quote appear in various sources. The caption under the quote is an Urdu translation of the same hadith.