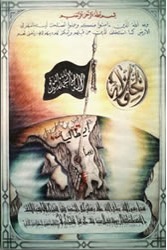 In this image, we see a black flag piercing the map of Italy. The Arabic script on the picture of Italy simply reads: “al-italya” (“Italy”) and “ruma” (“Rome”). On the right side of the image is an emblem that reads “al-khilafa” (“the Caliphate”) in Arabic calligraphy. At the top of the image is a line from the Qur’an (24:55), which reads: “God has promised to make those of you who believe and do the right, leaders in the land, as He had made those before them….” Combined, the symbols of the image suggest three things: 1) Italy is a place against (or within) which waging jihad is not only legitimate, but necessary; 2) this jihad will be a victorious one and those involved (i.e., righteous Muslims) will ultimately take (figurative or literal) power; and 3) the Caliphate will be re-established and Allah will grant land and inheritance of power to those who believe and work righteous deeds, as he granted it to those before them. These messages are emphasized by the text that appears at the bottom of the image, which is a hadith (prophetic tradition) attributed to the Prophet, prophesying the fall of Constantinople first and then Rome.

The black flag traces its roots to prophetic times. According to hadith, it was the battle flag of the Prophet Muhammad and was carried into battle by many of his companions. The image of the black flag has been used as a symbol of religious revolt and engagement in battle (i.e., jihad). In the contemporary Islamist movement, the black flag is used to evoke notions of jihad and of reestablishing the Islamic Caliphate.

Image of Black Banner with AK-47