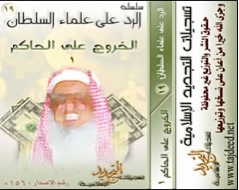 A significant amount of jihadi propaganda plays on popular sentiments in the Muslim world, such as the beliefs that the U.S. and other Western powers are only concerned with the Middle East because of its oil deposits, that Western society is greedy and materialistic and that Westerners are slaves to money. Jihadi propagandists use the motif of foreign currency as a means of capitalizing on these sentiments, and to associate non-jihadists with corruptive notions by suggesting that they can be bribed by Western money.

The series (of publications) announced in the image here is on the topic of “al-radd ‘ala ‘ulama’ al-sultan- al-khuruj ‘ala al-hakim” (“a response to ‘ualama’s [religious scholar’s] establishment: rebelling against a ruler”). On the right of the image, the title of the topic is repeated and there is a reference to the department within the Tajdid forum that is responsible for the content: “tasjilat al-tajdid al-islamiyya; huquq al-nashr wal-tawzi‘ ghayr mahfuza, wa-jaza Allah khayran man a‘ana ‘ala naskhiha wa-tawzi‘iha” (“Islamic recordings of al-Tajdid; publishing and distribution rights are not reserved [non-copyrighted material]; and God bless anyone who helps to copy and spread the content”). The corrupt nature of the ‘ulama’s establishment is highlighted by the image of American currency in the background behind the figure of the (establishment) religious scholar.