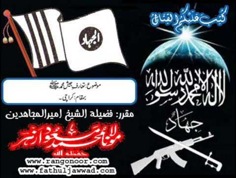 This image advertises a lecture to be given by Fadilat al-shaykh Mawlana Muhammad Mas‘ud Azhar, founder and leader of Jaish-e-Muhammad (JeM). The title Fadilat, which means “the excellent,” refers to an Islamic scholar. In fine print under the speaker’s name, which is written in red, appears the blessing “hafizahu Allah” (“may God keep him safe”). The topic of the lecture, which will take place in Karachi, is advertised as “getting acquainted with the JeM.” On the top right, the phrase captures the group’s slogan/goal which is a partial quote from the Quran 2:61: “kutiba ‘alaykum al-qital” (“fighting was ordained for you”) the Quranic quote finishes “though it is hateful unto you.”

In addition to providing information about the upcoming lecture, the advertisement combines several elements that encode the militant nature of JeM and express the scope of its aspirations. Specifically, the image includes a globe, rays of light, a crossed sword and rifle, a banner and the inclusion of the text of the shahada (Islamic testimony of faith holding that there is no god but Allah and that Muhammad is his messenger), all of which are common in jihadi imagery. The globe is used to globalize localized issues and conflicts, as well as to articulate the global aims/nature of the jihadi struggle and/or particular groups. The sword below the globe suggests a desire on the part of the designer to link the image to early Islamic history and the first generation of Muslims. Swords are seen as noble weapons that embody the religious purity, nobility and righteousness that is associated with the Prophet and his companions, as well as their successful military campaigns. Thus, the image of a sword helps depict current jihadi activities as modern extensions of those campaigns and lends them an aura of legitimacy. The fact that the sword is crossed with an AK47 here reflects that the latter is the new or modern sword of the jihadist.

Finally, the white banner in the image, with three black stripes and the word “jihad” in a black circle, is the JeM logo.