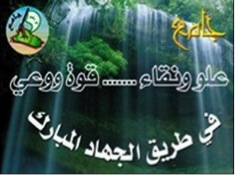 Islam ascribes sacred qualities to water, which is a prominent component in this image. It is a gift from God, the origin of all life on earth and the substance from which God created man (Qur’an 25:54). Along with grass (pasture for cattle) and fire, water is one of the three things to which every human is entitled. As a symbol of creation, life, sustenance and purification, water is used to evoke notions of religious purity and can also conjure up notions of the afterlife and heavenly paradise, and a waterfall in particular suggests an ongoing or active progress towards religious purity. In this manner, waterfalls can be associated with the soul, its spiritual progress and, ultimately, its elevation to heavenly paradise. In this image, water is also used to symbolize God’s promised assistance and generosity to the pious. This message is reinforced by the use of the slogan “‘uluww wa-niqa’…quwwa wa-wa‘y fi tariq al-jihad al-mubarak” (“exaltedness and purity…strength and awareness on the path of the blessed jihad”). The use of the phrase “on the path of” indicates the influence of the “path metaphor” and reflects its pervasiveness within the Islamic system. Those “on the path” are believed to possess positive qualities like purity and strength, while those “off the path” lack such qualities.The second dominant element in the image is the lush greenery, which, like the water, conjures the idea of God’s benevolence and is symbolic of creation, life and sustenance. Green is considered the traditional color of the Prophet Muhammad’s tribe, and has been adopted as a sacred color based on Qur’anic verses (76:21; 18:65-82) and a reliable hadith (prophetic tradition or report) that associates green with “universally good things.” The cave in the image conjures up a number of holy caves in the Islamic tradition, including: 1) the Qur’anic story of the “people of the cave”; 2) the cave of al-Hira outside of Mecca, where it is believed that the Prophet Muhammad received his first revelation; and 3) the cave of Thawr, where the Prophet Muhammad took refuge from his Meccan enemies during the hijra (migration) to al-Madina. This complex set of references all contribute to the aura of sanctity, purity and the perceived reality of divine intervention in favor of all those on the path of jihad, particularly those who were killed on it.