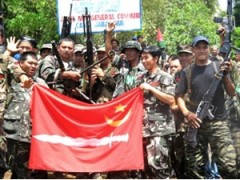 Finally, the sword in the logo suggests a desire on the part of the designer to link the group to early Islamic history and the first generation of Muslims. Swords are seen as noble weapons that embody the religious purity, nobility and righteousness that is associated with the Prophet, his companions and their successful military campaigns. This helps depict current jihadi activities as modern extensions of those campaigns and lends them an aura of legitimacy.