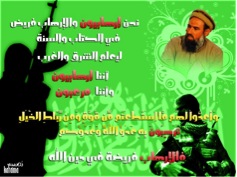 The image celebrates the influential Palestinian Sunni Islamic scholar, ‘Abdallah Yusuf ‘Azzam, who called for jihad to help the Afghan fighters against the Soviets in the 1980s. He is considered Usama bin Ladin’s most influential teacher and mentor, and it was he who persuaded Usama bin Ladin to come to Afghanistan. ‘Azzam’s theoretical rationalization of global jihad and practical approach to recruitment and training of mujahidin (fighters) from around the world flourished during the Afghan war against the Soviets and was crucial to the development of al-Qa‘ida as the base of a global jihadi network. ‘Azzam was assassinated in Afghanistan on 24 November 1989. The caption in the post above the image indicates that it was posted as an homage to ‘Azzam’s famous phrase: “we are terrorists.” The caption in the image contains a play on the modern Arabic word “irhabi” and all words derived from the Arabic root (meaning to terrify) are colored red. The caption reads: “nahnu irhabiyyun, wal-irhab farid fi al-kitab wal-sunna, li-ya‘lam al-sharq wal-gharb innana irhabiyyun wa-innana mur‘ibun; (Q 8:60) wa-a‘iddu la-hum ma istata‘tun min quwwatin wa-min ribat al-khayl, turhibun bi-hi ‘aduww Allah wa-‘aduwwakum; fal-irhab farida fi din Allah” (“we are terrorists, and terrorizing is an ordinance in the Qur’an and the Sunna [religious tradition], so that east and west may know that we are terrorists, and that we are terrifiers; (Q 8:60) and prepare for them what you can by way of weapons [that are shot or hurled] and horses, terrifying with it God’s enemy and your enemy; thus, terrorizing is a divine precept in Islam [lit. God’s religion]”). The text in the background is a calligraphic representation of the shahada (Islamic testimony of faith holding that there is no god but Allah and that Muhammad is his messenger).