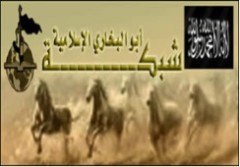 The horse, the main element in the image, is an important symbol in both pre-Islamic Arabia and Islamic culture. Traditionally, horses have been ascribed with positive qualities of chivalry, bravery in battle and victory, as evidenced in pre-Islamic poetry, the Qur’an, hadiths (prophetic traditions or reports) and other genres of literature. For example, the beginning of the Qur’anic sura 100 talks about “running horses” that appear as galloping through the world toward the final goal, namely, Judgment Day. Horses are also symbolic of the first generation of Muslims and that generation’s successful military campaigns, and are thus often employed to evoke religious sentiments with regard to the military victories of Muhammad and his companions.

The white horse specifically is often associated with the Qur’anic story of the Prophet Muhammad’s Isra’ and mi‘raj (night journey), when the Prophet is said to have ascended to heaven on the back of a strange white mount that was smaller than a horse but bigger than a mule (called Buraq).

The logo of Jama‘at al-Tawhid wal-Jihad (also known as al-Qa’ida in Iraq) is on the left side of the image, and a black banner was placed in the top right corner. The latter purposely resembles the classic black flag, which traces its roots to prophetic times. According to hadith, the black flag was the battle flag of the Prophet Muhammad and it was carried into battle by many of his companions. The image of the black flag has been used as a symbol of religious revolt and engagement in battle (i.e., jihad). In the contemporary Islamist movement, the black flag is used to evoke notions of jihad and of reestablishing the Islamic Caliphate.

The group’s logo contains an open Qur’an in front of an AK-47 and evokes a phrase commonly used by jihadists “kitabun yahdi w sayfun yansur” (a book [Quran] to guide, and a sword [for] victory).”  The phrase is attributed to Ibn Taymiya, an influential religious scholar revered by many jihadists.