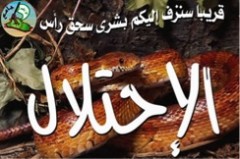 The snake, though not a central motif in the Islamic tradition, does appear in the Qur’an and in classical literature. As in Christianity, Iblis (the devil) appeared in the shape of a snake when he induced Adam and Eve to eat from the forbidden fruit. Therefore the snake suggests treachery, tyranny and general evil, and is often employed by jihadists to describe their enemies. Here, the snake is associated with the U.S. occupation of Iraq, as verbalized in the slogan: “qariban sa-naziffu ilaykum bushra sahqi ra’s al-ihtilal” (“soon we will give you the good news of crushing/pulverization of the occupation’s head”). The word “ihtilal” (“occupation”) is visually represented by the snake, but is also the dominant element in the image, written in large white letters across the snake’s body.