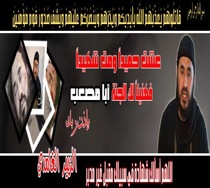 In this specific image, following common Muslim funerary epigraphy, the inscription opens with the basmalah (i.e. the words “bi-smi allahi al-rahman al-rahim,” or “in the name of God the merciful and compassionate”) and contains quotes of a Qur’anic text (the caption at the top contains the basmalah and Q 9:14).  This image commemorates the death of  a well-known figure—Abu Mus‘ab al-Zarqawi—who was killed on 7 July 2006.

The slogan in the middle is written in red and reads as follows: “‘ishta hamidan wa-mitta shahidan, fa-hani’an laka al-janna, aba mus‘ab, bi-idhni rabbika” (“you lived honorably and died as a martyr, and so paradise is ready for you, O Abu Mus‘ab, with God’s permission”).  The image also includes the name “al-Zubayr al-Ghamidi.” This is almost certainly the designer of the image.

It is notable that the image shows Zarqawi’s face covered in blood. According to Muslim law, any person who dies in defense of his faith is entitled to a Muslim burial without the customary ablution or purification process, or the change of clothing, which is necessary in the case of corpses of those  who did not earn the rank of martyr (shahid). In other words, the rank of martyrdom renders a corpse legally pure. At the bottom of the image, an additional caption appears: “allahumma as’aluka shahada fi sabilika muqbil, ghayr mudbir” (“O God I ask you to grant me martyrdom for your sake, charging forward [in battle], not turning back on my heels [and running away]”).