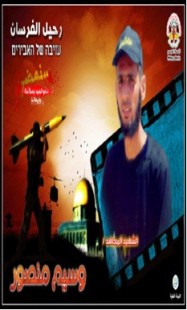 The text in this specific image reads: “rahil al-fursan-sa-namdi nahwa al-majd bi-silahina wa-imanina” (“the [last] journey of the cavaliers-we shall continue towards glory with our weapons and our faith”). The word commonly used for “deceased” is “al-rahil,” which literally translates to “the traveler.” The deceased in this image is identified as “al-shahid al-mujahid Wasim Mansur” (“the martyred fighter Wasim Mansur”). Interestingly, the caption in the top left corner appears in Hebrew as well as Arabic, although the Hebrew text suggests that the translation from Arabic was performed by a non-native speaker.  The logo in the top right of the image appears to be the logo of Palestinian Islamic Jihad.

In addition to the picture of the deceased and the caption, the image contains a number of elements that are part of the jihadi visual propaganda repertoire.  The image also features the Dome of the Rock. While Muslims across sectarian lines share a reverence for many holy sites, some sites hold special significance for certain groups. For instance, the Dome of the Rock is recognized and revered by all Muslims, as it was built in 692 A.D. by the Umayyid caliph ‘Abd al-Malik on the site where Muslims believe the Prophet Muhammad ascended to heaven in his mi‘raj (night journey). Indeed, it is considered the third holiest site in Islam after Mecca and al-Madina. At the same time, the Dome of the Rock is a powerful symbol of Palestinian nationhood.