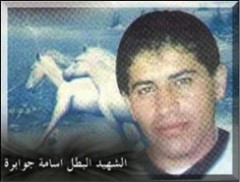 The combination of elements in this image signals notions of afterlife and martyrdom. Specifically, the mountains, clouds, rays of light on the horizon and the white horses suggest the martyr’s righteous character and heavenly reward. The white horse is most often associated with the Qur’anic story of the Prophet Muhammad’s Isra’ and mi‘raj (night journey), in which the Prophet is said to have ascended to heaven on the back of a strange white mount that was smaller than a horse but bigger than a mule (called Buraq). In Shi’a Islam, a white horse is also associated with the story of the Prophet’s grandson’s martyrdom at Karbala on 10 October 680 A.D., in which the grandson, Imam Husayn, is said to have ridden the white horse that will carry the mahdi (righteously guided Messiah) when he descends to earth again at the end of time. The caption at the bottom of the image reads: “al-shahid al-batal usama jawabra” (“the brave martyr Usama Jawabra”). Jawabra, also known as al-Nani, was a member of Fatah’s al-Aqsa Martyrs Brigade in the West Bank town of Nablus who carried out a martyrdom operation and killed an Israeli settler on 24 June 2001.