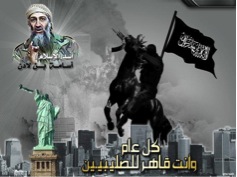 Jihadi propaganda often marks important jihadi operations/violent events in order to establish these events as key milestones that shape the current jihadi movement. Usually, these events are reinterpreted as illustrations of the effectiveness of the violent jihadi struggle and its success in targeting its enemies. In other words, they are used as examples of jihadi victory against much stronger and more powerful Western forces and evidence of the imminent victory of jihadist Islam over Western imperialism and secularism.
In this specific image, Usama bin Ladin appears in the top left corner, above the skyline of New York and the iconic American symbol of Lady Liberty. The caption under the bust identifies him as: “asad al-islam usama b. ladin” (“lion of Islam, Usama bin Ladin”). The light rays emanating from Bin Ladin and the gray clouds in the background may be associated with the foretelling of divine anger and punishment. The latter is an especially likely interpretation in light of Lady Liberty’s visible destruction and the visual reference to the events of 11 September 2011.

In this image, the rider is carrying a black banner bearing the shahada (Islamic testimony of faith holding that there is no god but Allah and that Muhammad is his messenger). According to hadith, the black flag was the battle flag of the Prophet Muhammad and it was carried into battle by many of his companions. Since then, the image of the black flag has been used as a symbol of religious revolt and engagement in battle (i.e., jihad). In the contemporary Islamist movement, the black flag with the shahada is used to evoke notions of jihad and of reestablishing the Islamic Caliphate.

The caption (directed at Usama bin Ladin) expresses the sum of all the elements: “kull ‘am wa-anta qahir lil-salibiyyin” (“may you always be [lit. every year you are] the vanquisher of the crusaders”). The structure of the phrase in Arabic plays on the wording of the traditional Arabic greeting/blessing said on holidays or birthdays.