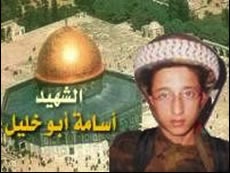 It is believed that Muslim martyrs will be highly rewarded in the afterlife for their sacrifice and that they hold a special position in heavenly paradise. It is therefore not surprising that martyrdom is a central theme in jihadi visual propaganda. Here, an adolescent is superimposed on a picture of a holy site (the Dome of the Rock). The caption states: “al-shahid Usama Abu Khalil” (“the martyr Usama Abu Khalil”). Abu Khalil was from the village of Attil, near Tul Karem in the West Bank, and was killed on 14 March 2003 at the age of sixteen. Together, the caption and the pictures in the image make clear that Abu Khalil attained martyrdom.

The incorporation of the Dome of the Rock in the image is related to the specific struggle in which Usama Abu Khalil participated. While Muslims across sectarian lines share a reverence for many holy sites, some sites hold special significance for certain groups. For instance, the Dome of the Rock is recognized and revered by all Muslims, as it was built in 692 A.D. by the Umayyid caliph ‘Abd al-Malik on the site where Muslims believe the Prophet Muhammad ascended to heaven in his mi‘raj (night journey). Indeed, it is considered the third holiest site in Islam after Mecca and al-Madina. At the same time, the Dome of the Rock is a powerful symbol of Palestinian nationhood. Because of its status in Islam, the Dome of the Rock is often used to code a message of inspiration for jihadi activism and the goal of martyrdom. Here, it conveys that Abu Khalil sacrificed his life for the promotion of Palestinian self-determination.