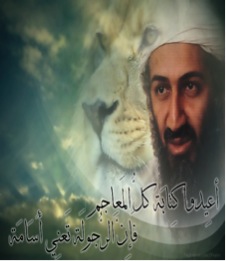 The image seems to be a combination of older elements, like the picture of Usama bin Ladin, which has been circulating in the media for years. Also familiar is the combination of Bin Ladin’s face and the face of a lion. The connection is expected, since “Usama” means “lion” in Arabic, and the lion is an important motif in Islamic art and culture that evokes qualities of bravery, strength and valor for Muslim audiences. It should also be noted that the lion motif recurs in various Islamic sources, including the Qur’an, hadith (prophetic traditions) and classical Arabic poetry.  In the modern era, the lion symbol has been employed by influential authors like Sayyid Qutb, and it has become a key motif in jihadist propaganda.

The image appeared on a website post underneath the caption (not seen here): لله درك وعلى الله أجرك تقبلك الله في الشهداء, which is comprised of two traditional phrases that are uttered in the context of someone’s death. The caption in the image contains an excerpt from a poem and reads: “a‘idu kitabat kull al-ma‘ajim, fa-inna al-rujula ta‘ni usama” (“rewrite all the dictionaries, for the term ‘rujula’ [masculinity and heroism] means ‘usama’”).