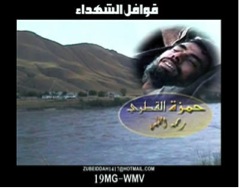 The image is entitled “qawafil al-shuhada’” (“convoys of martyrs”) and features the face and name of al-Qa’ida financier Hamza al-Qatari, who was killed in winter 2002 during a U.S. airstrike in Afghanistan. Under al-Qatari’s name appears the traditional blessing for the dead “rahimahu Allah” (“may God have mercy on him”). The mountains in the background are a common motif in jihadi visual propaganda and may allude to regions where jihadi forces are active, such as Afghanistan, Chechnya and Kashmir. More generally, however, mountains simply evoke divine omnipotence, eternity and grandeur. The mountains in the image lack the green color of life and abut a white, shroud-like sky, a combination that signals the figure’s death. Finally, as Islam ascribes the most sacred qualities to water and places great importance on purity and cleanliness, the water in the image resonates the notion of purification through ritual ablution, and thus speaks to the unsullied identity of the deceased as a faithful Muslim.