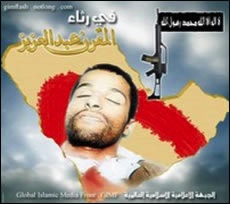 It is believed that Muslim martyrs will be highly rewarded in the afterlife for their sacrifice and that they hold a special position in heavenly paradise. It is therefore not surprising that martyrdom is a central theme in jihadi visual propaganda. In this image we see a common technique for depicting martyrs in jihadi visual propaganda, which combines a photograph of a martyr with a representation of the country in which he was killed or from which he originated. The purpose is to draw attention to the jihadi activities taking place within that country, while also emphasizing the oppression of the ruling powers in the country. Thus, this method both nationalizes the martyrdom and internationalizes what began as a local conflict.

Here, ‘Abd al-‘Aziz al-Muqrin is shown against a background of white clouds, a bloody map of Saudi Arabia and a black banner with the shahada (Islamic testimony of faith holding that there is no god but Allah and that Muhammad is his messenger), all of which evoke notions of death (in the state of purity), shrouds, grief, mourning and attainment of martyrdom. Depicting the Saudi state alone, without bordering countries or bodies of water, evokes a national context and scope of the specific jihad in that country. At the same time, because the figure of ‘Abd al-‘Aziz has been superimposed on the Saudi map, there is clearly an attempt to associate the image with al-Qa’ida and the global jihadi movement in general. ‘Abd al-‘Aziz al-Muqrin was the head of al-Qa’ida in Saudi Arabia and the mastermind behind the suicide bombing of a residential housing compound in Riyadh on 8 November 2003, in which seventeen people were killed. The last operation commanded by ‘Abd al-‘Aziz was probably the 18 June 2004 beheading of the American hostage Paul Johnson. It was reported that a few hours after this operation, when ‘Abd al-‘Aziz was moving the American engineer’s body, he was killed after being surrounded by local Saudi forces. The caption at the top reads: “fi ritha’ ‘Abd al-‘Aziz bin ‘Isa al-Muqrin asad al-islam” (“eulogizing al-Muqrin ‘Abd al-‘Aziz”).  The image was taken from a video produced by the Global Islamic Media Front, which includes a nashid dedicated to al-Muqrin.

The black banner in the image traces its roots to prophetic times. According to hadith (prophetic tradition or report), the black flag was the battle flag of the Prophet Muhammad and it was carried into battle by many of his companions. The image of the black flag has been used as a symbol of religious revolt and engagement in battle (i.e., jihad). In the contemporary Islamist movement, the black flag is used to evoke notions of jihad and of reestablishing the Islamic Caliphate. Finally, the use of an automatic rifle as the mast of the black banner signals that Abd al-‘Aziz “lived by his sword.”