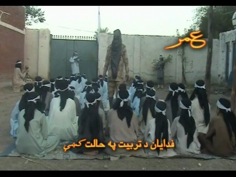 The image is from a TTP recruitment video aimed at children in Pakistan. The video, purportedly filmed by Omar Studio, shows children as young as seven years old receiving instructions in how and why to be a suicide bomber against infidels‚ presumably NATO forces in neighboring Afghanistan and other targets in Pakistan.  The caption at the bottom reads: “fedayan d tarbiyet pe halet kami” (“fida’i education…”).

The video was filmed in August 2008 in Pakistan’s Federally Administered Tribal Area (FATA) of Spinkai Ragzai, South Waziristan, an area under the control of then TTP leader, Baytullah Mahsud.