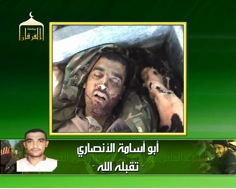 This specific image from a video produced by al-Furqan Media (the official media arm of the Islamic State of Iraq whose logo is found in the top left corner of the image) depicts a deceased fighter identified as Abu Usama al-Ansari and was one of several pictures posted by the user. The post’s subject was:   رجالٌ صدقوا ما عاهدوا الله عليه [.::صــــور::..] شهداء دولة العراق الإسلامية  [“men who kept their promise to God [pictures] martyrs of ISI”],  with the caption: “taqabbalahum Allah fi al-firdaws al-a`la” [“may God accept them into the highest level of Paradise” (paradise is portrayed in the classical literature as a multi-tiered]. More than simply commemorate the dead, the frequent appearance of a deceased’s bloody face or body in jihadi imagery finds its roots in the symbolism of the blood of an unavenged martyr in Islam (which in turn was an accommodation of certain pre-Islamic practices). The bloody corpse constitutes evidence for the attainment of the rank of martyrdom (shahada).  According to Muslim law, any person who died in defense of his faith is entitled to a Muslim burial without the customary ablution or purification process, or the change of clothing, which is necessary in the case of corpses of those who did not earn the rank of martyr (shahid). In other words, the rank of martyrdom renders a corpse legally pure. For this reason, it is fairly common for photos of bloody faces to appear in various jihadi media releases, as well as in posts on forums, as the images serve as evidence that the deceased attained the desired rank of shahid. Even after the soul has left the body it is believed to continue to produce a sweet smell, like the smell of misk (musk).