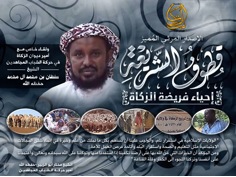 The image is from a video produced by al-Shabab’s media arm, al-Kata’ib Foundation, and released on jihadist forums on April 1, 2011.  In the image on the right appears the yellow calligraphic logo of the Shabab’s Kata’ib media company. Under the Kata’ib logo is the video’s title: “qutuf al-shari`a – ihya’ faridat al-zakat” [“A collection (lit. plucked fruit) from the shari`a (Islamic law) – reviving the duty of Zakat” (alms giving)]. The caption on the left, next to the picture of Shaykh Sultan, indicates that the video features “a special meeting with the minister of the office of Zakat, the shaykh Sultan b. Muhammad Al Muhammad, may God keep him safe.” The pictures of livestock are from scenes in the clip where Somalis are shown receiving livestock and sacks of seeds as part of al-Shabab’s charity work.

At the bottom appears a paragraph containing some introductory remarks by the commander of the Somali al-Shabab al-Mujahidin Movement, shaykh Mukhtar Abu al-Zubayr: “the Islamic states are completely stable, and we must partake with all the knowledge and experience that we have in the development of various social areas like education, health, stabilization of the country and affording work opportunities for the nation. Certainly, the resources with which God has blessed our country should be enough for us if we utilize them and put our trust in God the Sublime, praise be to Him, and rely on ourselves, and refrain from seeking help from the infidels and [avoid] lack of moderation.” The pictures at the bottom depict scenes from the charity work and of the Somali people’s daily lives.