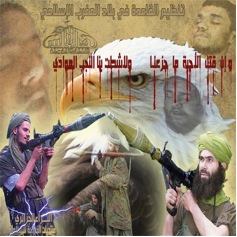 Jihadi propaganda often marks important jihadi operations/violent events in order to establish these events as key milestones that have shaped the current jihadi movement. Usually, these events are reinterpreted as illustrations of the effectiveness of the violent jihadi struggle and its successes in targeting its enemies. In other words, the events are used as examples of jihadi victory against much stronger and more powerful Western forces and evidence of the imminent victory of jihadist Islam over Western imperialism and secularism.

This specific image is a still picture from a recruitment video produced by al-Andalus that seeks to inspire followers with a theme of perceived injustices to Muslims, while highlighting a successful jihadi attack. Specifically, the video features the Ghazwat al-Damus, or gazwa damos (raid of al-Damus), which was an attack carried out by al-Qa’ida in the Islamic Maghreb (AQIM). AQIM published the video as early as April 2010 as part of a series entitled “zilal al-suyuf” (“shadows of swords”), which addresses the situation of Muslims in Algeria, Libya and Nigeria (see http://www.muslm.net/vb/showthread.php?t=386143). The video shows operations against the Algerian police and National Army soldiers, ambushed on Algeria’s remote highways, and contains sequences of Abu Yahya al-Libi and Ayman al-Zawahiri.

The image combines several popular elements of Islamic imagery, including the eagle that appears in the center. The world of birds in general is very important in the symbolic language of Islam. Pre-Islamic Arabs imagined soul birds fluttering around the grave of the deceased, and the bird continues to symbolize the flight of the soul beyond the confines of this world. The eagle in particular was an important symbol in Ancient Egypt, as depicted by Horus, the eagle-headed god of the sky and god of war. Furthermore, while not as rooted in Arabian and Islamic culture as the hawk and the falcon, the eagle is thought to be the emblem of Salah al-Din al-Ayyubi (d. 1193 A.D), who successfully led the Muslim world in battle against waves of Christian crusaders from the West in the 12th century. Indeed, Salah al-Din’s eagle was adopted by a number of Arab countries in the 20th century as a symbol of pan-Arabism.

The caption, which is partially illegible, reads, in part: “wa-in qutila al-ahibba ma jazi‘na…” (“and if loved ones are killed, we are unable to…”). Notably, the caption is written in red, which is clearly meant to suggest blood here.

Finally, the appearance of lightning in the bottom left corner may be associated with the foretelling of divine anger and punishment.