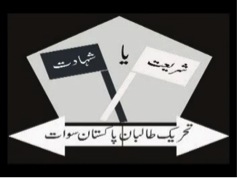 The image is from a video produced by Tehrik-e Taliban Pakistan (TTP) entitled “jahim al-murtaddin fi swat” (“Apostates’ Hell in the Swat valley”).

The caption in the image reads: “shari‘at ya shahadat” (“shari‘a [Islamic law] or shahada [here: martyrdom]”). Thus, the image sums up the TTP’s goal and tactics in one neat slogan, and expresses the notion that for the TTP there are only two directions in which to advance (double arrow): implementation of Islamic law (goal) or martyrdom (the means by which to achieve the goal). Finally, the image takes for granted and plays into the “path metaphor” in Islam (according to which being righteous means following “a correct or straight path”), as it posits a sign for the viewer, evoking the idea of choosing one’s path at a given time and place.

Group Name Tehrik-i Taliban Pakistan (TTP) - Swat
Group Type Jihadist Group
Group Affiliation AQ Affiliates / Associates
Dominant Colors Gray, White
Secondary Colors Black
Language Urdu
Isolated Phrases / Mottoes / Slogans Shari`at ya shahadat
Image Number 0377
Groups Region of Operation South Asia
Groups Country of Operation Pakistan
Geopolitical Symbols Country Flag, Slogan
Geopolitical Analysis Black and white flags
Religious Symbols Black / White / Green Banners
Religious Symbols Analysis Black and white
Visual Themes According to prophetic tradition (hadith), the black flag was the battle flag of the Prophet Muhammad and it was carried into battle by many of his companions. The image of the black flag has been used as a symbol of religious revolt and engagement in battle (i.e., jihad). In the contemporary Islamist movement, the black flag with the shahada (Islamic testimony of faith holding that there is no god but Allah and that Muhammad is his messenger) is used to evoke notions of jihad and of reestablishing the Islamic Caliphate.