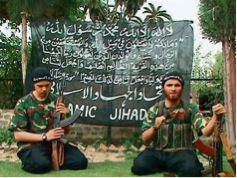 In the image are two members of the Islamic Jihad Union (IJU) who were killed on 30 April 2010. On the left is German citizen Eric Breininger, also known as Abd al-Gaffar al-Almani, who was also associated with the al-Ta’ifa al-Mansura group. Al-Ta’ifa al-Mansura is a mainly Turkish group that operates under the command of the Afghan Taliban and is closely linked to IJU. Breininger had contacts with the homegrown Sauerland cell (named for the West German region where it was based), a terrorist group that planned to bomb U.S. targets in Germany in September 2007. Three members were arrested as they prepared to carry out the attacks. Breininger had appeared in several propaganda videos posted by the IJU and had tried to recruit new members in Germany. On the right is Alif Media manager and administrator of the IJU website, Salah al-Din Turki.

The black banner in the image begins with the text of the shahada (Islamic testimony of faith holding that there is no god but Allah and that Muhammad is his messenger) and then cites verse Q 4:75: “wa-ma lakum la tuqatiluna fi sabil Allah wal-mustad‘afina min al-rijal wal-nisa’ wal-wildan alladhina yaqulun rabbana, akhrijna min hadhihi al-qarya al-zalim ahluha, wa-j‘al lana min ladunika waliyyan, wa-ja‘l lana min ladunika nasiran” (“and why do you not fight for the sake of God, and [for the sake of] those oppressed men, women and children who say O our Lord get us out of this village [the text is referring specifically to Mecca] whose people are unjust, and give us from your midst a leader, give us from your midst a defender”). Under the quote appears the name of the IJU in Arabic and English.