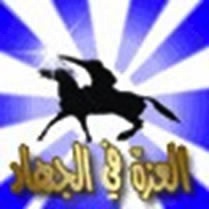 The image is dominated by the black silhouette of the horse and rider and the slogan at the bottom which reads: “al-‘izza fi al-jihad” (“dignity [is] in jihad”). The horse and rider motif is common in jihadi visual propaganda. The rider emphasizes the element of human agency in jihad, and is a way to enhance the traditional symbol of a horse and flesh out notions of aggression and the call to jihad. The horse is an important symbol in both pre-Islamic Arabia and Islamic culture. Traditionally, horses have been ascribed with positive qualities of chivalry, bravery in battle and victory as evidenced in pre-Islamic poetry, hadiths (prophetic traditions or reports) and other genres of literature. Horses are also symbolic of the first generation of Muslims and that generation’s successful military campaigns, and are thus often employed to evoke religious sentiments with regard to the military victories of Muhammad and his companions, including the concept of jihad itself.