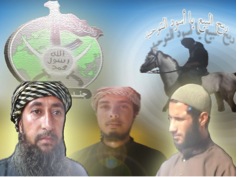 The image was produced by Jund Ansar Allah, a local terrorist network in the Gaza Strip affiliated with  the global jihad movement, which was behind the failed attempt to perpetrate a showcase terrorist attack at the Nahal Oz fuel terminal (8 June 2009). The group refers to this incident as ghazwat al-balagh (raid of proclamation) and includes images of three JAA members killed in the raid: Hani Muhammad al-Tarabin or “Abu `Adnan,” Tahir `Isa `Isa or “Abu Muslim” and Fahad Muhammad al-Minawi or “Aby Suhayb.”

The group’s logo incorporates many common elements of the jihadist visual lexicon: two crossed swords, the seal of the prophet, an AK-47 and a black banner.  In the background Europe, Asia and Africa appear without national divisions (reflecting jihadist distaste for national causes or borders imposed on the Muslim world during colonialism).

The caption is a play on and an indirect allusion to Qur’anic verse 2:16. The verse expresses the Qur’anic concept of “striking out on a good deal when exchanging the right path for the wrong path.” There is an even stronger direct allusion to verse 9:111, where it is said: “be happy with your [good!] deal you made.” The concept is a prevalent one in Islam, and spiritual choices are often put in economic terms (i.e., “getting a good deal when following God’s commands”).

Group Name Jund Ansar Allah
Group Type Jihadist Group
Dominant Colors Blue, White
Secondary Colors Yellow, Black
Language Arabic
Isolated Phrases / Mottoes / Slogans Rabiha al-bay` ya usud al-tawhid
Image Number 0362
Groups Region of Operation Middle East
Groups Country of Operation posted 6/11/2009 by user "muslim mujahid" [a Muslim fighter]
Body Parts Face / Bust
Air Sky
Fire Light Rays / Light
Geopolitical Symbols Symbol of party, movement or company, Slogan
Geopolitical Analysis Jund Ansar Allah logo - a green globe behind two crossed swords and an AK mast for a black banner bearing a white text of the shahada, the seal of the Prophet in front and the name of the group at the bottom in white against a black background.
People Operative / Warrior (=mujahid), Man / Men, Horse Rider
People Analysis JAA members who participated in the 2009 attack on Nahal Oz fuel station
Religious Textual References Text manipulation
Religious Textual References Analysis An indirect allusion to Qur'anic verse 2:16 and the concept of "striking out on a good deal when exchanging the right path for the wrong path." There is an even stronger direct allusion to 9:111 where it is said be happy with your deal you made. The concept is a prevalent one in Islam.
Fauna Horse
Visual Themes In the background appears a horse and rider, which is common in Islamic imagery and jihadi visual propaganda. The importance of the horse in both pre-Islamic Arabia and Islamic culture is evidenced by pre-Islamic poetry, hadiths (prophetic traditions or reports) and other genres of literature--ascribing horses with the positive qualities of chivalry and bravery in battle. For example, the beginning of the Qur’anic sura 100 talks about “running horses” that appear as galloping through the world toward the final goal, namely, Judgment Day. Horses are also symbolic of the first generation of Muslims and that generation’s successful military campaigns, and thus are often employed to evoke specific Salafi religious sentiments with regard to the military victories of Muhammad and his companions. The rider emphasizes the element of human agency in jihad, and is a way to enhance the traditional symbol of a horse and flesh out notions of aggression and the call to jihad. Overall, the horse and rider motif places current jihadi activities within the same unfolding dialectic as the jihad of early Islam.