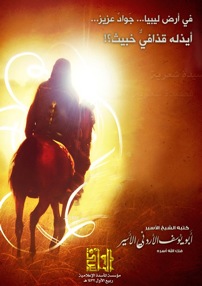 This image is the cover of a book written by  “Shaykh Abu Yusuf al-Urduni” and disseminated by “al-Ma’sada Media Foundation: the Voice of Shumukh al-Islam.” The text in the image is attributed to the imprisoned Shaykh al-Urduni and, according to a caption in the image, it was distributed by al-Ma’sada in Rabi‘ al-Awwal 1432 A.H. (February 2011). At the top right, the text reads: “fi ard libya jawad ‘aziz; a-yadhulluhu qadhafi khbith?” (“In  Libya there is a mighty [fleet of] horses, will wicked Qadhafi humiliate it!?”). At the bottom right, the text states: “katabahu al-shaykh al-asir abu yusuf al-urduni; fakka Allahu asrahu” (“written by the imprisoned shaykh  Abu Yusuf al-Urduni [the Jordanian], may Allah set him free”).

The image contains the common horse and rider motif. The horse is an important symbol in both pre-Islamic Arabia and Islamic culture, as evidenced by pre-Islamic poetry, hadiths (prophetic traditions or reports) and other genres of literature ascribing horses with the positive qualities of  chivalry and bravery in battle. For example, the beginning of the Qur’anic sura 100 talks about “running horses” that appear as galloping through the world toward the final goal, namely, Judgment Day. Horses are also symbolic of the first generation of Muslims and that generation’s successful  military campaigns, and thus are often employed to evoke specific Salafi religious sentiments with regard to the military victories of Muhammad and his companions. The rider emphasizes the element of human agency in  jihad, and is a way to enhance the traditional symbol of a horse and flesh out notions of aggression and the call to jihad. Thus, the horse and rider motif places current jihadi activities within the same unfolding dialectic as the jihad of early Islam.