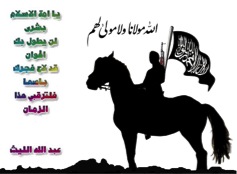 According to prophetic tradition (hadith), the black flag was the battle flag of the Prophet Muhammad and it was carried into battle by many of his companions.  In the contemporary Islamist movement, the black flag with the shahada (Islamic testimony of faith holding that there is no god but Allah and that Muhammad is his messenger) is used to evoke notions of jihad and of reestablishing the Islamic Caliphate.

The horse and armed rider motif in the image is common in jihadi visual propaganda. The importance of the horse in both pre-Islamic Arabia and Islamic culture is evidenced by pre-Islamic poetry, hadiths (prophetic traditions or reports) and other genres of literature ascribing horses with the positive qualities of chivalry and bravery in battle. For example, the beginning of the Qur’anic sura 100 talks about “running horses” that appear as galloping through the world toward the final goal, namely, Judgment Day. Horses are also symbolic of the first generation of Muslims and that generation’s successful military campaigns, and thus are often employed to evoke specific Salafi religious sentiments with regard to the military victories of Muhammad and his companions. The rider emphasizes the element of human agency in jihad, and is a way to enhance the traditional symbol of a horse and flesh out notions of aggression and the call to jihad. Overall, the horse and rider motif places current jihadi activities within the same unfolding dialectic as the jihad of early Islam.

The black caption over the image of the horse and rider reads: “Allah mawlana wa-la mawla lahum” (“God is our patron/ Lord, and they do not have a patron”). The flashing green and rainbow colored text on the left is a call to all Muslims and reads: “ya ummat al-islam, bushra lan yatula biki al-hawan, qad laha fajruki basiman fal-tarqubi hadha al-zaman” (“O Muslim nation, good tidings, your state of shame will not be prolonged, your dawn has broken smiling, so take heed of this moment”).