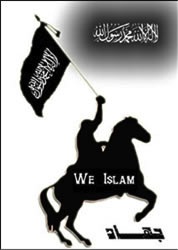 The horse and rider motif is common in jihadi visual propaganda. The rider emphasizes the element of human agency in jihad, and is a way to enhance the traditional symbol of a horse and flesh out notions of aggression and the call to jihad.

The horse is an important symbol in both pre-Islamic Arabia and Islamic culture. Traditionally, horses have been ascribed with positive qualities of chivalry, bravery in battle and victory, as evidenced in pre-Islamic poetry, the Qur’an, hadiths (prophetic traditions or reports) and other genres of literature. For example, the beginning of the Qur’anic sura 100 talks about “running horses” that appear as galloping through the world toward the final goal, namely, Judgment Day. Horses are also symbolic of the first generation of Muslims and that generation’s successful military campaigns, and are thus often employed to evoke Salafi religious sentiments with regard to the military victories of Muhammad and his companions, including jihadist sentiments.

The black banner specifically is a joint symbol of vengeance and revolt that traces its roots to prophetic times. According to prophetic hadith, the black flag was the battle flag of the Prophet Muhammad and it was carried into battle by many of his companions. The image of the black flag has been used as a symbol of religious revolt and engagement in battle (i.e., jihad). In the contemporary Islamist movement, the black flag is used to evoke notions of jihad and of reestablishing the Islamic Caliphate. Here, the black banner includes the caption of the shahada, which is the Islamic testimony of faith holding that there is no god but Allah and that Muhammad is his messenger and which is repeated in the top right corner.

The text in English suggests that the creator of the image was a non-native speaker.  The text at the bottom of the image reads jihad .