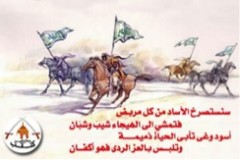 The horse and rider motif is common in jihadi visual propaganda. The rider emphasizes the element of human agency in jihad, and is a way to enhance the traditional symbol of a horse and flesh out notions of aggression and the call to jihad. The horse is an important symbol in both pre-Islamic Arabia and Islamic culture. Traditionally, horses have been ascribed with positive qualities of chivalry, bravery in battle and victory as evidenced in pre-Islamic poetry, the Qur’an, hadiths (prophetic traditions or reports) and other genres of literature. For example, the beginning of the Qur’anic sura 100 talks about “running horses” that appear as galloping through the world toward the final goal, namely, Judgment Day. Horses are also symbolic of the first generation of Muslims and that generation’s successful military campaigns, and are thus often employed to evoke religious sentiments with regard to the military victories of Muhammad and his companions, including jihadist sentiments. The horse motif is thus used to evoke jihad itself, and in this image, it places current jihadi activities within the same unfolding dialectic as the jihad of early Islam.

All the riders in the image are holding a white flag with the shahada (Islamic testimony of faith holding that there is no god but Allah and that Muhammad is his messenger) inscription on them. In the Islamic tradition, the Prophet Muhammad used the white flag to represent both the leader of the Muslim army and the first Muslim state. In jihadi propaganda, the white flag is usually used synonymously with the black flag, which is a symbol of religious revolt and engagement in battle, i.e., jihad. However, the white flag has a less overt militant association. The caption reads: “sa-nastasrikhu al-asad min kull marbid, fa-tamshi al-hija’ shayb wa-shubban; usud waghy ta’ba al-hayat dhamimatan wa-talbas bil-‘izz al-rada fa-hua akfan” (“we call out to the lions from every lair, and they go on the attack, young and old; lions of war reject life as [if it is] a repulsive thing, and they don death with pride, [wearing] coffins”). The text is a verse from a well-known poem written by the Iraqi poet Ma‘ruf al-Rusafi (1875-1945).