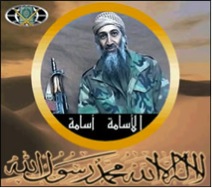 The caption reads “al-usama Usama; la ilah illa Allah Muhammad rasul Allah” (“the lion Usama; there is no god but Allah, Muhammad is his messenger”). The encircled figure of Bin Ladin mimics the sun setting on sand dunes on the horizon.

There is perhaps no landscape in Islamic culture and tradition more evocative and recognizable than the desert, which is often depicted with images of sand dunes, as they are important markers of Islam and Arab traditions and identity. Sand dunes are commonly used  to evoke the first generation of Muslims, and can serve as a reference to both their success in jihad and their unadulterated faith. Moreover, as sand may be used to substitute water in ritual ablution, it resonates the notion of purification, and thus speaks in this context to the unsullied identity of Bin Ladin as a faithful Muslim. The appearance of the shahada (Islamic testimony of faith holding that there is no god but Allah and that Muhammad is his messenger) at the bottom of the image further emphasizes Bin Ladin’s righteous and faithful nature and the fact that he was on God’s path.

The image in the top left corner is one of the older logos of the Global Islamic Media Front (GIMF).  The crossed swords in the logo suggest a desire on the part of the designer to link the group to early Islamic history and the first generation of Muslims. Swords are seen as noble weapons that embody the religious purity, nobility and righteousness that is associated with the Prophet, his companions and their successful military campaigns. This helps depict current jihadi activities as modern extensions of those campaigns and lends them an aura of legitimacy.

Image of UBL & Burning US and Israeli Flags