Image of M16 and Star of David 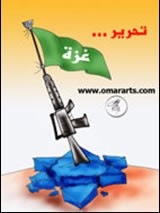 The green flag, like the black and the white flags, very often bears the shahada (Islamic testimony of faith holding that there is no god but Allah and that Muhammad is his messenger), although here it bears the word “ghaza” (“Gaza”). Since green is the traditional color of the Prophet Muhammad, green flags (regardless of the text) always conjure up historical, genealogical and religious notions of the Prophet and early Islam. Furthermore, the green represents God’s benevolence and creative power in nature, and is thus linked to springtime and growth. For this reason, the green flag has an optimistic feel, one that speaks to both the Islamic nature of the enterprise and its success. In this specific image, the mast of the flag is an M16 (often carried by Israeli Defense Force soldiers), which is positioned in the heart of a crumbling blue Star of David on a red background. The one word caption in the top right brings the image together: “tahrir” (“liberation”). The Star of David is always used explicitly in reference to the Israeli occupation of Palestine. By extension, it also evokes fears of a greater Jewish conspiracy.   The text “www.omararts.com” (now defunct) was probably the website of the designer of the image.