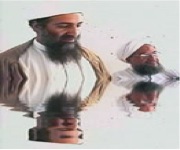 The image features the figures of Usama bin Ladin and Ayman al-Zawahiri, appearing to be standing in deep waters, over rippled reflections of themselves. Both leaders appear in traditional Muslim garb: white cloaks called thawb and a dressier outer cloak, typically worn by religious leaders or government officials, called bisht. Zawahiri is further identified as a scholar by the ‘Imama (headscarf wrapped on his head as a turban; also called kafiyya or ghutra in different regions). Bin Ladin appears to be wearing a traditional white taqiya (cap), which is typically worn under a kafiyya. The traditional garb and the element of water are meant to suggest the purity of the figures’ faith and their personal religious piety.