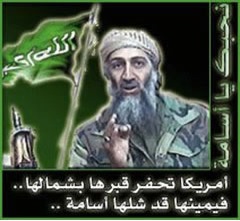 The green flag, like the black and the white flags, very often bears the shahada (Islamic testimony of faith holding that there is no god but Allah and that Muhammad is his messenger), although here it bears the takbir (the words “Allahu Akbar,” or“God is great”). Since green is the traditional color of the Prophet Muhammad, green flags (regardless of the text) always conjure up historical, genealogical and religious notions of the Prophet and early Islam. Furthermore, the green represents God’s benevolence and creative power in nature, and is thus linked to springtime and growth. For this reason, the green flag has an optimistic feel, one that speaks to both the Islamic nature of the enterprise and its success. The pictures of Usama bin Ladin and an automatic rifle associate the image with the global jihadi movement and emphasizes the continued armed struggle. The caption reads: “nuhibbuka ya Usama; Amrika tahfiru qabraha bi-shimaliha, fa-yaminuha qad shallaha Usama” (“we love you Usama, America is digging its grave with its left, while Usama has already chopped off her right”).

Image with Text from Nashid & UBL