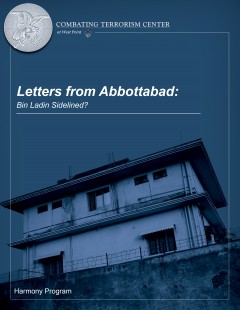 This report is a study of 17 de-classified documents captured during the Abbottabad raid and released to the Combating Terrorism Center (CTC). They consist of electronic letters or draft letters, totaling 175 pages in the original Arabic and 197 pages in the English translation. The earliest is dated September 2006 and the latest April 2011.  These internal al-Qa`ida communications were authored by several  leaders, most prominently Usama bin Ladin.  In contrast to his public statements that focused on the injustice of those he believed to be the “enemies” of Muslims, namely corrupt “apostate” Muslim rulers and their Western “overseers,” the focus of Bin Ladin’s private letters is Muslims’ suffering at the hands of his jihadi “brothers”. He is at pain advising them to abort domestic attacks that cause Muslim civilian casualties and focus on the United States, “our desired goal.” Bin Ladin’s frustration with regional jihadi groups and his seeming inability to exercise control over their actions and public statements is the most compelling story to be told on the basis of the 17 de-classified documents. “Letters from Abbottabad” is an initial exploration and contextualization of 17 documents that will be the grist for future academic debate and discussion.

A note on translation:

The quality of the English translation provided to the CTC is not adequate throughout. When the translation was deemed inadequate, quotations cited in this report have either been amended or translated anew by Nelly Lahoud. Furthermore, the conversion of the dating of the letters from the Hijri to the Gregorian calendar is inaccurate in some places. The Appendix provides corrected dates to some of the letters, along with some pointers on how some letters relate to others.  For those wishing to conduct their own analysis of the documents, it is highly recommended to refer to the original Arabic documents, not the translations.

This document is a letter dated 21 October 2010 from Bin Ladin to "Shaykh Mahmud" (`Atiyya). The letter is primarily...

This letter was authored by Usama bin Ladin and addressed to Shaykh Mahmud (`Atiyya `Abdul Rahman) on 27 August 2010....

This document is a letter authored by the American al-Qa`ida spokesman Adam Gadahn to an unknown recipient and was written...

This document is a letter dated 7 August 2010 from “Zamarai" (Usama bin Ladin) to Mukhtar Abu al-Zubayr, the leader...

This letter is authored by Mahmud al-Hasan (`Atiyya) and Abu Yahya al-Libi and addressed to the amir of Tehrik-e-Taliban Pakistan...

This letter was originally an exchange between Jaysh al-Islam and `Atiyya that was forwarded first to a certain `Abd al-Hamid...

A Suggestion to Change the Name of Al-Qa`ida

This document is part of a longer letter which was not released to the CTC. It is not clear who...

Letter from UBL to `Atiyatullah Al-Libi 2

This letter, dated 28 March 2007, is addressed to a legal scholar by the name of Hafiz Sultan, and it...

This letter dated 11 June 2009 was written by `Atiyya to the “honorable shaykh." It is possible that it was...

A Draft of Zawahiri’s Message to the Egyptians

This is a draft that formed the basis of a publicly available document, part four in a series of statements...

This document consists of two letters addressed to “Abu `Abd-al-Rahman," almost certainly `Atiyya `Abd al-Rahman. It was sent by an...

This document is a letter addressed to “Abu Basir" (Nasir al-Wuhayshi, leader of al-Qa`ida in the Arabian Peninsula – AQAP)...

This document is a series of paragraphs, some of which match the content found in SOCOM-2012-0000016. This document was likely...

Letter of Advice to UBL

This document is a letter addressed to Usama bin Ladin from “a loving brother whom you know and who knows...

This document is a long letter authored by Usama bin Ladin after the death of Sheikh Sa'id (Mustafa Abu'l-Yazid) in...

This document contains various types of documents including: photo copy for Saudi Arabia resident cards for the Palestinian citizens (Salim...

This document is a (9) page typed document containing (170) names of Al-Qa`ida members including an explanation on the status...

This document is a letter from `Abd al-Wakil al-Somali to Abu al-Faraj. In this letter the author asks Abu al-Faraj...