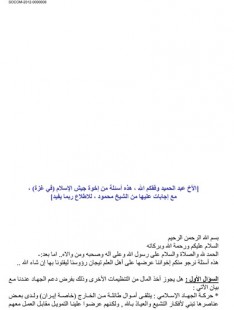 This letter was originally an exchange between Jaysh al-Islam and `Atiyya that was forwarded first to a certain `Abd al-Hamid (and presumably to Bin Ladin later). The gist of Jaysh al-Islam’s letter makes it known that the group is in need of financial assistance “to support jihad,” and that the group is seeking `Atiyya’s legal advice on three matters: 1) the permissibility of accepting financial assistance from other militant Palestinian groups (e.g., Fatah and Palestinian Islamic Jihad) | 2) the permissibility of investing funds in the stock market in support of jihad | and 3) the permissibility of striking or killing drug traffickers in order to use their money, and even drugs, to lure their enemies who could in turn be used by Jaysh al-Islam as double-agents. `Atiyya’s response, written sometime between 24 October 2006 and 22 November 2006, is cordial but distant, responding to the questions but refraining from giving any strategic advice.

Letter from UBL to `Atiyatullah Al-Libi 2

ISI Report on the Killing of 12 Jaysh al-Mujahedeen Members