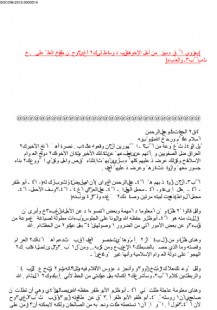 This document consists of two letters addressed to “Abu `Abd-al-Rahman,” almost certainly `Atiyya `Abd al-Rahman. It was sent by an operative who knows `Atiyya and is a religious student with ties to the senior shaykhs and clerics in Saudi Arabia. While the letters are not dated, their contents suggest they were composed soon after January 2007 | they read very much like an intelligence assessment, designed to provide `Atiyya with some perspective on how al-Qa`ida generally, and the Islamic State of Iraq (ISI) more specifically, are perceived amongst Saudi Arabia scholars of varying degrees of prominence. The author provides `Atiyya with brief summaries of private meetings the author had with certain scholars, with the clear intent of evaluating the level of support that al-Qa`ida enjoys from some relatively prominent members of the Saudi Arabia religious establishment.