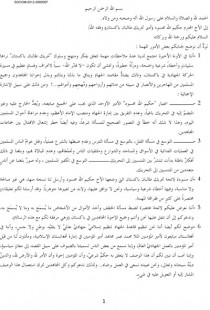 This letter is authored by Mahmud al-Hasan (`Atiyya) and Abu Yahya al-Libi and addressed to the amir of Tehrik-e-Taliban Pakistan (TTP), Hakimullah Mahsud. It is dated 3 December 2010 and is sharply critical of the ideology and tactics of the TTP. The letter makes it clear that al-Qa`ida’s senior leaders had serious concerns about the TTP’s trajectory inside Pakistan, and the impact the group’s misguided operations might have on al-Qa`ida and other militant groups in the region. The authors identify several errors committed by the group, specifically Hakimullah Mahsud’s arrogation of privileges and positions beyond what was appropriate as the TTP’s amir | the TTP’s use of indiscriminate violence and killing of Muslim civilians | and the group’s use of kidnapping. `Atiyya and al-Libi also take issue with Mahsud labeling al-Qa`ida members as“guests” and the attempts made by other groups (presumably the TTP) to siphon off al-Qa`ida members. The authors threaten that if actions are not taken to correct these mistakes,“we shall be forced to take public and firm legal steps from our side.”

Letter from the Leader of One Group to Another