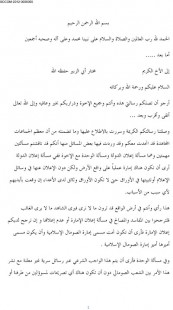 This document is a letter dated 7 August 2010 from “Zamarai” (Usama bin Ladin) to Mukhtar Abu al-Zubayr, the leader of the Somali militant group Harakat al-Shabab al-Mujahidin, which merged with al-Qa`ida after Bin Ladin’s death. The document is a response to a letter Bin Ladin received from al-Zubayr in which he requested formal unity with al-Qa`ida and either consulted Bin Ladin on the question of declaring an Islamic state in Somalia or informed him that he was about to declare one. In Bin Ladin’s response, he politely declines al-Shabab’s request for formal unity with al-Qa`ida.

A Letter Sent from Abu Khutba to Diyala Provincial Administration

A Short Note by Abu Khutba and Abu Hayder

A Letter Sent from Abu Khatab to Diyal Provincial Administration

A Letter Sent from Abu Dujana to Diyala Provincial Administration