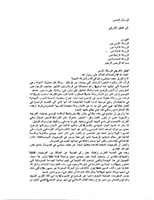 This document contains five letters. The first letter is addressed to “Dear Brother Saif” and signed by “Your Uncle: Abu al-Walid”. In this letter Abu al-Walid provides a lengthy response to issues raised in two previous letters (not included in this collection) sent by Saif from Somalia, where he is in charge of al-Qa`ida activity. Abu al-Walid also gives his frank observations about the prospects for jihad in Somalia. The second letter is signed by Hassan al-Tajiki, and it provides an update and analysis concerning jihadi activity in Tajikistan, Afghanistan, Russia, and China. The third letter is also signed by Abu al-Walid and it contains congratulations for the victory in Somalia and a strategic review of worldwide jihad operations. The fourth letter is directed to Usama bin Laden, Abu Hafs al-Misri and Abu `Ubayda al-Banshiri from Hassan. He was writing from an al-Qa`ida training camp and relates his disappointments concerning reverses al-Qa`ida has experienced in Central Asia. He also seeks to apply lessons learned from the arrest of international terrorist Carlos the Jackal. The fifth letter is also signed by Hassan al-Tajiki, and it is an analysis evaluating the impact of jihad in the Caucasus. Written while fighting is raging in Grozny, Hassan sees this struggle holding great promise for the future of jihad.