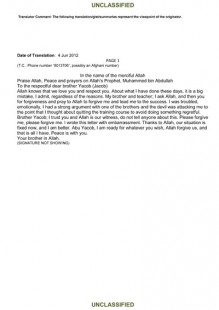 This harmony document is a collection of seven letters that were written by or to a number of al-Qa`ida personalities during the late 1990s and early 2000s. The document includes two Arabic language wills that were written by `Abdullah Muhammad (Fazul Harun/Harun Fazul) – one that is addressed to Usama bin Laden, Saif Al-`Adl and Abu Hafs al-Commandant (Abu Hafs al-Misri) and another for his wife. Also included in this batch of documents is a letter written in Swahili that is branded by the Global Islamic Front to Expel Jews and Christians from the Arabian Peninsula and that mentions Usama bin Laden and Yosef al-Tanzani | a recommendation letter written by Abu Muhammad Al-Misri on behalf of “brother Abu `Amar” | a Pashtu language letter branded with the Islamic Emirate of Afghanistan logo from Mullah `Abdul Haq to the“Kabul Province Security Commander” | a letter mentioning Abu Hafs al-Arab | a will written by Rashid | and several other letters.

Beware of Imitators: Al-Qa`ida through the Lens of its Confidential Secretary