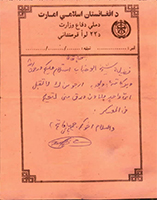 This document is a series of letters to Abu Khabab, head of a training camp. Abu Mus`ab al-Suri is the author of two of the letters. In the first, al-Suri says he went to Kandahar and got the permission and recommendation letter from the Emir [presumably the Taliban leader] addressed to the ministry of defense to start a camp, with the necessary supplies. He also met with Usama bin Laden and Abu Hafs al-Misri. In the second letter, al-Suri says that he has received military aid from the Taliban. If Abu Khabab sends him an official document, he may be able to get official help for Abu Khabab’s camp as well. He also wonders if there are free (or at least cheap) places for two recruits, from Uganda and Yemen. A number of letters talk about operational and financial issues signed by Abu Hafs, Abu Usama and Abu `Isa. Other letters address to abu Khabab signed by various names | asking him to accept listed names for individuals to join the training camp of which he is in charge.

Al-Qa’ida’s (Mis)Adventures in the Horn of Africa

A Letter Sent from Abu Khutba to Diyala Provincial Administration

A Short Note by Abu Khutba and Abu Hayder

A Handwritten Note from Abu Sulaiman to Abu Khutba