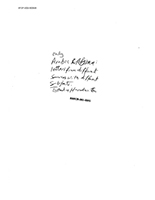 This series of letters, which date to the 1993-1997 period, were captured in Afghanistan at a compound that reportedly served as a residence for Pakistan’s Inter-Services Intelligence Directorate. Written by a number of different organizations, these letters endorse specific individuals and seek to solicit support for the Islamic Jihad Movement of Bangladesh. The letter on page five is written and signed by Jalaluddin Haqqani, and the first letter seeks support for jihad in Burma.

The Haqqani Nexus and the Evolution of al-Qa’ida

Mustafa’s History of the Afghan Jihad